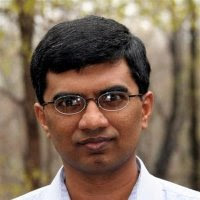 Have you recently bought a house, or sold shares in a company, or maybe sent money overseas? If so, I suspect that the experience has left you wondering why these simple transactions take so much time and cost so much money. In each case, what looks like a simple financial transaction takes place over many days via a complex web of interactions between many parties. For example, let’s say that I want to send some money to my mom in India. The way it works today, the money passes through several overseas banks, linked together by so-called “correspondence banking” arrangements, before it shows up in her account. This process takes days, with fees pile up along the way. Such circuitous, expensive and often risky financial transactions are what my team at IBM Research, and our partners at the Linux Foundation want to flip on its head with blockchain.

Blockchain is an emerging platform for transaction services that will fundamentally change the way we do business in many industries. Blockchain technology has the potential to radically transform multi-party business networks, enabling significantly faster, less expensive, lower risk transactions and innovative new business models.

Blockchain is an append-only, shared ledger of digitally signed and encrypted transactions that is replicated across a peer network of nodes. Cryptography is used to ensure that participants have visibility only into information in the ledger that they are authorized to see. The copies of the ledger across the peer nodes are kept in sync by running a coordination protocol called the “consensus” algorithm. Transactions once committed onto the ledger can never be changed since no node can unilaterally change its copy of the ledger; i.e., participants cannot rewrite history or deny past transactions.

Going back to my earlier money transfer example, if both my bank and my mother’s bank kept their accounts on the blockchain, then one could have an instantaneous, low-cost transaction that just involves the two banks and yet is invisible to all other participants who have access to the blockchain.

Another interesting capability of the blockchain is that you can attach business logic to the transactions. This so-called “smart contracts” capability allows one to model and automate business processes. To see how this can be useful let’s take an example of international trade: a US retailer wants to buy a Chinese toy manufacturer’s teddy bears. The latter wants to get paid before shipping the teddy bears. The former wants to pay after inspecting the received teddy bears. Today, banks step in as trust intermediaries to close this gap. Banks vouch for the retailer by extending a line of credit – a letter-of-credit – based on which the manufacturer ships the goods, and the payment happens when the goods are received.

The entire end-to-end trade process involves many participants: the exporter, the importer, the exporter’s bank, the importer’s bank, shipping companies, and customs officials, as well as complex, often manual interactions involving many documents, making everything expensive and time consuming. With blockchain, the business logic of the process can be coded as a smart contract and executed automatically, leading to reduced cost, increased speed and reduced risk in international trade.

Much has been made of the 44,000 lines of code IBM has put toward the Linux Foundation’s Hyperledger Project. My team has been developing several key algorithms, with many more on its way, for this project. For example, we have developed a new consensus algorithm, called Sieve, tailored to specific blockchain use cases. Cryptographers at our labs in Almaden and Zurich have implemented an identity management service built with the latest in cryptography. A key capability of this service is user transactional privacy (anonymity and unlinkability of transactions). We have also implemented fine-grained privacy and confidentiality control that allows authors of smart contracts to precisely specify both who can view them and who can execute them.

Let’s go back to those teddy bears. Using a blockchain, the manufacturer and retailer may only know that money and goods exchanged – but otherwise they only see digital signatures that customs and shipping met their agreements. Likewise, customs and shipping may not know how much the entire transaction cost. More importantly, none of the competitors of the manufacturer can infer from the blockchain about this trade. These “smart” contracts sit on the blockchain, with each participant only seeing and signing the part that pertains to their role.

Blockchain technology is viewed by many businesses as both a threat and an opportunity. Without a doubt, blockchain will disintermediate some roles in the financial services sector. For example, the days of overseas payments going through long chains of intermediaries are nearly over. At the same time there is a huge opportunity to reimagine businesses using the shared ledger and smart contract capabilities of the blockchain, leading to new services. Back to the international trade example: once the state of the trade is captured on the blockchain, it opens up a whole world of new possibilities. IoT-enabled events could trigger fractional payments depending on the location of the goods in transit. For instance, when the teddy bears are half way to their destination, 50 percent of the payment is made.

And as I mentioned, the immense data from ledgers that can’t change or be deleted is a great source of opportunity to apply cognitive computing. I’m looking forward to the new roles that could emerge. One thing is for certain, whether sending money to a relative in another country, or moving goods internationally, blockchain will make things faster, cheaper and more transparent – which is a good thing.

IBM Research is hosting a blockchain workshop in Chicago. If you’d like to learn more visit this Web site.