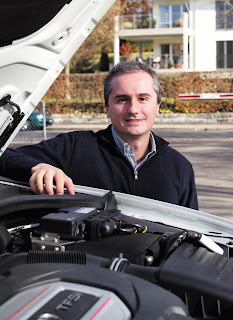 In 2013 Cristiano Malossi received the IBM Research Prize for his doctoral thesis on simulating the human cardiovascular system under either physiological or pathological conditions. While he probably didn't know it at the time, IBM already had big plans for his career, initially offering him a post-doctoral position at IBM's lab in Zurich shortly after.

A little more than two years later he has made an impact on several client projects. And due, in part, to this success, he has recently received a position on Costas Bekas' Foundations of Cognitive Solutions team.

As if that wasn't already worth celebrating, Cristiano is also counting down the days to November 19 when this year's Gordon Bell Prize will be announced at Supercomputing 2015 in Austin, Texas. He along with Costas, several other colleagues, and academic collaborators are one of five finalists for the prestigious prize, which IBM last won in 2013 by simulating the cavitation of 15,000 bubbles.

Before all the excitement revs up, I had a chance to recently speak with him about his research and his passions.

Tell us bit about your background.

Cristiano Malossi (CS): I was born and grew up in Milan, Italy where we know a thing or two about great design and engineering. When it was time to chose a degree for my studies, I went straight towards aerospace and aeronautical engineering, as aircraft technology is undoubtedly one of the most fascinating real world application for engineering.

Studying airplanes and particularly aerodynamics, I developed a great interest towards CFD and numerical simulations. For this reason after receiving both undergrad and grad degrees from the Politecnico di Milano, I moved to the math department for one year to deepen my knowledge about computer modeling and numerical simulations. That was indeed the first time I faced a real geological problem, within a collaboration with the Italian firm ENI. In that context, our group developed tools to use supercomputers to study movements of the subsoil layers over the last 5-10 million years, with the aim to help geologist to identify possible new sources of oil for extraction.

Thanks to the results of that work, in 2009 Prof. Alfio Quarteroni offered me a PhD position in applied mathematics at the EPFL. Upon graduating and winning the IBM Research Prize, I joined IBM in July 2013.

What was your first project at IBM?

CS: In high performance computing the conversation always starts with how many Flops? And what is the LINPACK ranking? But these numbers tell only a little part of the story. What really matters is time to result, and actual energy cost of the computation. Anyone can build a large supercomputer, but if it is inefficient at solving real large-scale problems, what's the point? So my first project was an EU project called Exa2Green which is short for "Energy Aware Sustainable Computing on Future Technology - Paving the Road to Exascale Computing".

Its goal was to essentially re-think algorithms to solve problems on high performance computers, faster and with less energy. More Flops isn't always better, and we demonstrated this. In fact, the project just recently wrapped up with very good results.

You joined IBM a little too late to contribute to the 2013 Gordon Bell Prize, but now you are a co-author for 2015. Can you talk a little bit about your submission?

CS: To be clear, the submission is the result of a global collaboration with the University of Texas, New York University, California Institute of Technology, and IBM. And it wouldn't have been possible without access to the BlueGene supercomputers at RPI, Jülich and LLNL.

We attempted to simulate mantle convection, which is the slow motion of magma caused by convection currents which carry heat from the interior of the planet towards the Earth's crust.

This may sound a bit peculiar, but geologists consider it one of the "10 grand research questions in Earth sciences." Our current understanding of this principle is surprisingly very limited. In fact my colleague Costas Bekas likes to say that geologists understand planets millions of kilometers away better than our own.
Our idea was to simulate the mantle convection because it is directly responsible for earthquakes, volcano eruptions, mountain building and long-term sea level change.

The biggest challenge was to combine all the many complex modeling ingredients needed to simulate such a tough problem, within a scalable implicit-solver algorithm, able to efficiently run on the largest supercomputers available today. This is the only way to push forward existing simulations, where either the model was simplified to by-pass algorithmic constraints, or the size of the problem was reduced considerably to run on smaller machines.

Our result is unique because incredibly we were able to efficiently use 97 percent of the 1.6 million cores and 96 racks of LLNL Sequoia supercomputer -- an efficiency loss of only 3 percent is unheard of. Our solver was able to speed up the time to solution in only a few days. Frankly, it's not possible to do any better in terms of efficiency at this scale.

When you aren't studying the Earth's mantle, what do you do for fun?


CS: Well I am a bit of a speed junky. Indeed I have been following Formula 1 since I was only six, and particularly during the Schumacher-Ferrari era I was so enthusiastic that I woke up during the night to follow races on the other side of the planet. When I recently discovered that on a few days per year it is possible to drive your own car on these same historical F1 tracks that I saw many times on TV, I could not resist. And so whenever I get the chance I enjoy taking my 360 horsepower Audi S3 to the racetrack.

I am still a rookie pilot, but I already drove on a few tracks, including Monza which is not far from my hometown, and next year I plan to drive on many more.