Analyzing cloud and car movement for a perfect solar forecast

The 3,000 km World Solar Challenge route runs north to south through the Australian outback, from Darwin to Adelaide. That means the critical component in the race – the sun – will slowly arc over the cars’ panels from left to right. The sun’s position, its radiation, and other weather elements are what our physical analytics team at IBM Research will measure and predict for the University of Michigan’s solar car team during the WSC, October 18-25. 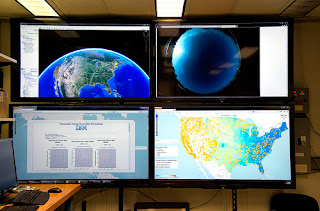 We hope our short-term and long-range solar forecasts help UM dodge clouds and find the perfect place to charge their car battery before sundown to enhance the chance that they win the race. But the forecasting challenge we’re solving with cognitive computing could also impact the solar energy industry at large. Maybe solar powered mass transit someday?

Solar forecasting is nothing new in meteorology. TV weathermen have been telling us how sunny it is for decades. So, the amount of solar data is huge – which is exactly what we needed. Our recent test forecasting work for the US Department of Energy showed a 30 percent improvement in solar radiation prediction accuracy.

Now, we’re taking this analytics on the road.

Weather data on the move

UM originally approached us for help with improving the forecasts of solar radiation, wind speed, and temperature as inputs to their race strategy. As we looked over their data, we discovered that perhaps even more importantly, they needed to know where to stop and charge their solar car. The car, a massive solar panel on four wheels (that uses up to 5 kW of electricity), does charge its battery while on the move. But charging up at the beginning and end of each day – while parked and with the solar panel turned into the sun – accounts for as much as 50 percent of their overall charge. We could give them optimal stopping points along the WSC route as a part of our predictive analysis. 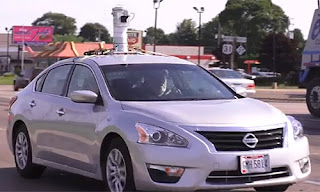 The first step was to add GPS capability to our solar camera system. Already used in the DOE pilot, the bowl-shaped camera and other sensors onboard captures solar radiation, cloud type and height, air speed and direction. That information is then plugged into our weather forecast data; car data, such as its ground speed and battery charge level; and route data, including stop lights, to produce long-range and short term (10-15 minute) prediction models.

This is a lot of moving data. All of which will be shipped via satellite uplink to-and-from our systems in New York and UM’s weather vehicle on the WSC route – another wrinkle we needed to solve with algorithms! Normal weather modeling would need supercomputing resources, like a couple of racks on a Blue Gene. We, instead, blend existing weather agencies’ models with the data coming from the camera and the solar car.

We then needed to give UM a lightweight dashboard to see our predictions. Using open source visualization tools, we built a 2-D interface that shows the students in the weather car the short-term forecast: what will happen along the route in the next 10 to 15 minutes. And also the long-term forecast: what the rest of the day, even the week, will look like along the route. 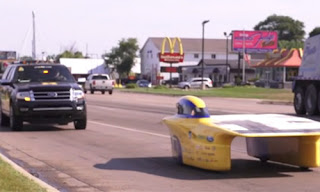 With 15 minutes of lead time, the students can talk to their driver about how much to adjust the car’s speed to go around or through an oncoming cloud. The previous option was to just look out the window and judge with their eyes! They can use the long-term forecast to help choose the perfectly unobstructed sunny and cool spot to charge the car battery. Clouds and shade are bad. But too much heat can be a bad thing too, as every degree above 25o C reduces the panel’s efficiency by about 0.4 percent. All of this, we hope, equates to more minutes (maybe hours?) shaved off UM’s final race time.

Preparing for Australia taught us how to creatively use limited data for our analytics – and how the in-motion analytics could make an impact beyond solar car racing. We hope to provide this application of cognitive computing as an “expert system” to anyone or any institution that needs precise weather forecasting. Imagine your TV weatherman being able to tell you exactly when and where a small local storm will blow through your neighborhood.

Read more about the World Solar Challenge and solar forecasting