What if a patent that could make your car aware of the environment to help improve your city’s air quality?

Imagine you’re driving into New York City. It’s a summer day. Sunny, hot… and the smog is bad. The city knows the pollution is a problem, and wants your help to abate it. So, as you drive through the EZPass toll on the Triborough Bridge, you – or more accurately, your hybrid car – gets a message asking “Can the City of New York switch your powertrain to ‘all electric power’ while you’re visiting?” If you say “yes,” your toll fee will be discounted.

I had the idea while riding around Bangkok. Many of the taxi drivers can switch their fuel sources from standard petrol (regular unleaded gas) to cheaper liquefied petroleum (such as propane or butane). Why not have software automatically make a switch based on environmental conditions? That’s essentially what the Thai cabbies were doing manually to save a few baht. The system we invented does it to save on automobile emissions based on location.


A partnership between your car and the environment

You and I don’t necessarily know the ozone rating or smog levels as we commute to and from work. But sensors do. Sensors that send data to weather stations, and city officials. If our cars, in turn, have sensors that picked up this data, and could communicate with these third parties, our car’s powertrain could adjust its emissions while driving.

Currently, only plug-in hybrid electric vehicles (PHEVs) can make this kind of auto-powertrain switch (unless you count taxicabs from Thailand). But think about driving around in a congested city. You’re probably not driving in a way to notice the difference between a gas-powered versus all electric engine. So, with your permission, why not let the environment – via a sensor – tell your car to stay on “electric” while you’re in city limits?

Today’s hybrids work only to maximize the vehicle’s performance based on what the driver does. This invention just adds external considerations to the vehicle’s efficiency calculations. This means retrofitting is doable by adding a sensor or two, and updating the onboard software to respond to their measurements. And in the patent’s current form, the driver would still have to agree to allow any of these outside adjustments. (So don’t worry, nothing will take over your car!) Just passing through via the highway? Say “no” to the all-electric switch at the toll booth. 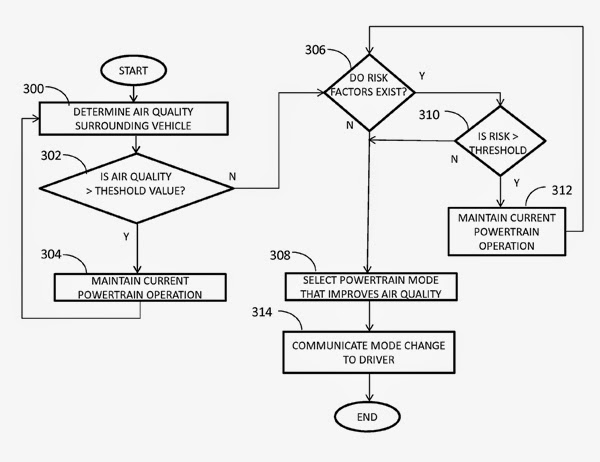 Every PHEV and city it drives through is a customer

In attempting to determine the patent’s potential impact, we calculated that about 30 percent of the cars on the road need to use alternative fuels to make a significant dent in city smog levels. While the hybrid market share currently hovers around 3 percent, PHEVs continue to grow, and J.D. Power predicts that one-third of all vehicles will use some kind of alternative fuel by 2025 (17.5% being PHEVs). And some cities may reach a practical number much sooner. As civic and other government environmental agencies get a clearer picture of emission levels, this patent could deliver a small, but significant, way citizens can help improve a pollution problem.

IBM’s own “commuter pain index” shows that bad traffic isn’t going away. So while the patent doesn’t solve a lousy commute, it can help make it cleaner.