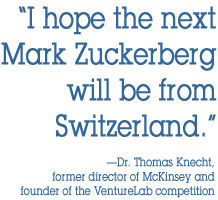 In 2010, scientists at IBM Research - Zurich created the world’s smallest three-dimensional map of the earth (a GuinnessWorld Record) demonstrating a new tool to fabricate structures and objects on the nanometer scale.

But IBM isn’t in the nano-tooling business, so standard procedure to bring the tool to market would require a partner – similar to what was done with the scanning tunneling microscope in the mid-80s.

The two inventors, Felix Holzner and Dr. Philip Paul, took a different approach and decided to license the technology from IBM, bringing it to market themselves under the name of SwissLitho.

Felix and Philip met while working together at starting in 2009, when the tool was first conceived. In 2010, two papers highlighting the work were published in Science and Advanced Materials. It received high accolades from the scientific community and gave them the confidence to launch SwissLitho.

The collaboration between and SwissLitho will extend beyond just patent licensing. A joint development agreement will be set up within the framework of an EU research project and a development project. These projects aim to advance the technology of the NanoFrazor and will extend the opportunities for to use the NanoFrazor for novel research applications.

Before packing up for their new offices, Felix and Philip answered a few questions.

When is SwissLitho officially going to be launched?

Felix: We actually founded SwissLitho back in January of 2012. We are slowly creating some marketing buzz with the launch of our website by doing some press interviews, and contacting potential customers.

What does this nano-patterning tool do?

Philip: We call our tool the NanoFrazor and you can think of it as a nano-sized chisel, similar to what the ancient Egyptians used to create hieroglyphics.

Our NanoFrazor is an exciting new tool for the fabrication of nanometer-sized, 3D shaped devices and structures. Quality control and metrology can be performed immediately during or after patterning, ensuring very short turnaround times.

Scientists and nanotechnology producers can use this economical and user-friendly tool to fabricate and investigate quickly and easily the nanostructures that are increasingly needed for electronic, optical or quantum nano-devices.

What are your respective roles within the company, and how did you decide that?

Felix: Well, it was pretty clear from the beginning that I would act as CEO. I’ve been responsible for the business side from the very start.

Philip: My focus has been more on the technical development, so my business card will read Chief Science Officer. But as with any startup, we’ll be wearing many different hats.

Felix, you participated in “VentureLab” at ETH Zurich. Can you tell us something about that?

Felix: VentureLab is a special entrepreneurial workshop that provides coaching for startups. I needed the credits for my PhD, so it seemed a perfect match. It’s fairly competitive—they only take 25 out of about 150 applicants. The participants propose their own projects, and five of the 25 are then chosen as case studies. SwissLitho was one of them.

In fact, your NanoFrazor project ended up receiving the Venture and venturekick award. Congratulations.

Felix: Thank you, yes, this has really given the NanoFrazor some welcomed exposure within the investors community.

What gave you the final push to go ahead with your startup?

Felix: IBM had been looking for business partners to commercialize our nanofabrication technology. Negotiations were conducted for over a year, but in the end, we ultimately decided that our technology has become too valuable to hand over to another company.

Philip, what was your main contribution?

Philip: I joined the project to make the tool much faster and more ready for commercialization. I was hired to push its boundaries to see how fast it could go.

How did you come up with the name “NanoFrazor”?

Felix: First of all, the name had to be unique for branding purposes. We coined the word “Frazor” from the German word “Fräse”, which means “milling tool”, combined with “razor” to highlight the sharp tip that creates the patterns.

Who are your potential customers?


Felix: We’ll target academia to start, but eventually we also hope to attract industrial customers. The technology needs to be improved and refined before that will be feasible, however. Our goal is have our technology used throughout academia in order to improve it and find new applications.

Philip: Our technology is a good alternative to e-beam lithography because of its small desktop-sized footprint and its significantly lower cost. So in the longer term, we believe that major suppliers of scientific instruments could be very interested in our technology. There could be some good synergies with atomic force microscopy tool manufacturers.

Is your product “Made in Switzerland”?

Philip: For the most part, yes. The components are sourced from suppliers in the US, Switzerland and Germany. Don’t forget: at the moment it’s just a prototype, still in the cottage industry phase. We have the know-how to make our own electronics locally.

What about copycat or retro-engineering manufacturing?

Philip: Our invention is protected by five patents and the design is quite clever and refined, if we do say so ourselves (laughs).

Felix: Many thanks. Launching a new business is always a risky undertaking, but we’re optimistic it will work.

Philip: The NanoFrazor has so much potential. We are convinced it will be a boon to nanotechnology.