We won an Emmy!

Earlier today it was announced that IBM was presented a unique award. Together with FOX, an IBM Research project born out of Almaden won an Engineering Emmy award for Innovation from the Academy of Television Arts and Sciences. According to the Academy, by improving the ability of media companies to capture, manage and exploit content in digital form, IBM and Fox have fundamentally changed the way that audio and video content is managed and stored. 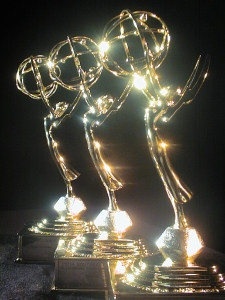 "With the capabilities of LTFS, IBM has introduced an entirely new role for tape, as an attractive high capacity, easy to use, low cost and shareable storage media. LTFS can make tape usable in a fashion like removable external disk, a giant alternative to floppy diskettes, DVD-RW and USB memory sticks with directory tree access and file-level drag-and-drop capability. LTFS can allow the for passing of information around from one system or employee to another. And as for high video storage capacity, a 1.5TB LTO-5 cartridge can hold about 50 hours of XDCAM HD video!"

Lead researcher on the project David Pease is a long time storage research expert at the Almaden lab in San Jose, CA. Pioneering many of the tape and disk storage technologies out of IBM Research over the last decade, David recalls a significant factor in deciding to pursue this project the way he did. "We really needed to make the first version open source," David said. "The idea of a file system that was cross-platform and interoperable was key; we wanted people to have an interface they were familiar with, similar to disk with file folders, drag and drop and double-click, but we also wanted to make sure it wasn't tied to only Windows or only Unix. The real future for acceptance for just about any kind of storage technology is interoperability and that people aren't tied to a platform."

David and his team developed LTFS from concept to fruition in just less than 3 years. An impressive feat in the research world, he shares some thoughts about winning an Emmy for his work:

First, I am truly stunned.  This recognition is more than we ever expected so early in the project, and hopefully it reflects the importance of what we've done.  When we started this work, we said that our goal was to change the tape industry and the Media and Entertainment business; it seems that we are well on the way to realizing these goals.


I have to point out that an idea and project like this are never the work of an individual.  From Ed Childers and the other tape experts in Tucson, to the folks at Almaden who encouraged me to get involved with tape (again), to the team of great researchers and developers who worked on this in my group, to the tape specialists in the Yamato Lab who joined my team or worked to support it, I have to say that we couldn't have gotten here without the efforts of each of you.  Thank you all for making this possible!

Fun fact: This past February, David Pease completed a 41-day motorcyle ride from San Jose, CA to Panama City, Panama with 3 companions on different stages of the trip. You can read about his travels through California, Northern, Central and Southeast Mexico, Guatemala, Honduras, Nicaragua, Costa Rica and finally Panama at his blog here.