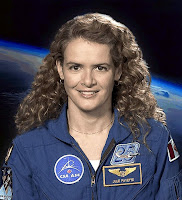 On this 16 day flight of the space shuttle Endeavour, Julie was both the flight engineer of the spacecraft, as well as the mission specialist in charge of operating the main robotic arm during the spacewalks around the International Space Station.

Julie, a Montreal native, worked in 1991 as a Visiting Scientist in the Communications Science Department of IBM Research – Zurich. Trained as a computer scientist, she had worked as a system engineer with IBM Canada from 1986 to 1988. Several long-time Zurich Lab staffers recall Julie as being very bright, energetic, and clear in her opinions and goals. She was very popular with her colleagues.

She is a trained pilot, speaks six languages, and is married with two children.